Decision on the merits of Communication No: 0012/Com/001/2019 Legal and Human Rights Centre and Centre for Reproductive Rights (on behalf of Tanzanian girls) against the United Republic of Tanzania 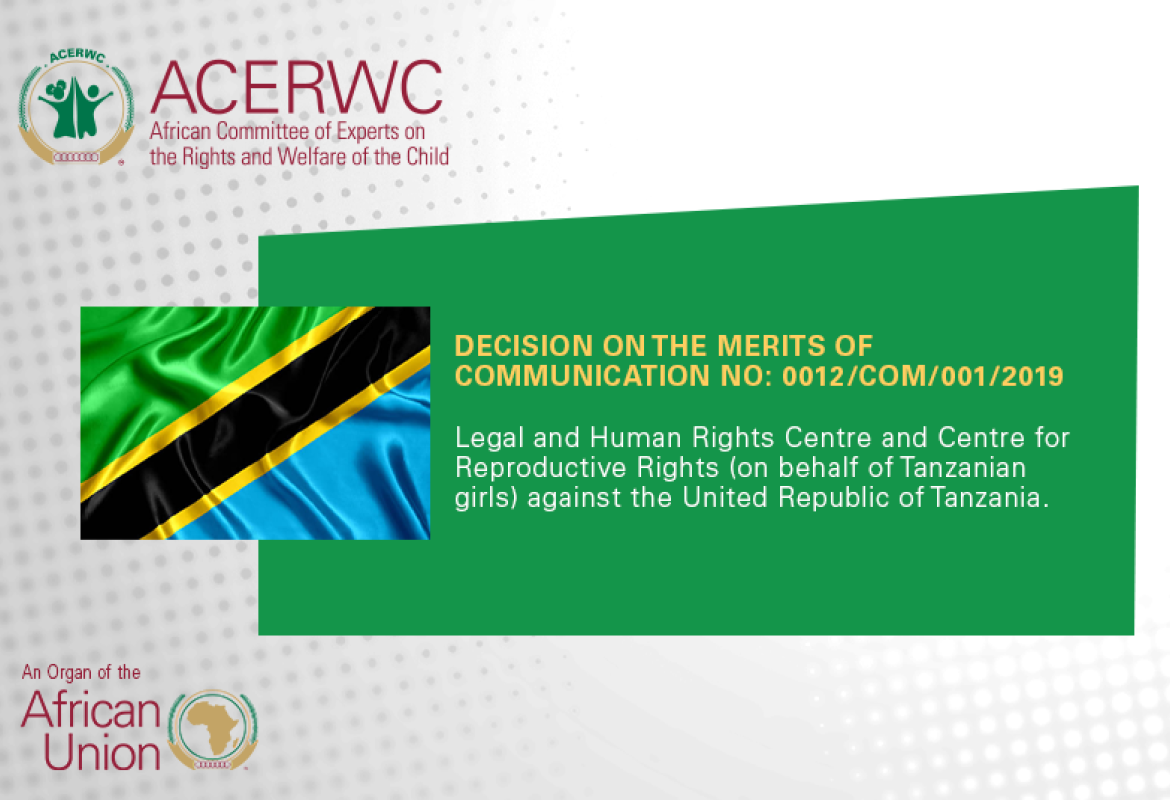 The African Committee of Experts on the Rights and Welfare of the Child (ACERWC)
has just released its Decision on the merits of Communication No: 0012/Com/001/2019
in the matter between Legal and Human Rights Centre and the Centre for Reproductive Rights (on behalf of Tanzanian girls) against the United Republic of Tanzania requesting the Respondent State as adopted during the 39th Ordinary Session of the Committee held virtually from 21 March to 01 April 2022. The Communication alleges, among others, that the Government of Tanzania’s policy on the expulsion of pregnant and married girls with no opportunity of re-entry to schools and the forced pregnancy testing conducted in schools violate various provisions of the African Children’s Charter. Such as the right to be free from cruel, inhuman, and degrading treatment (Article 16), the right to education (Article 11), the right to equality and non-discrimination (Article 3), and the right to be protected from harmful social practices and stereotypes (Article 21), the principle of the best interests of the child (Article 4), the right to health as it includes the right to access sexual and reproductive health services (Article 14), the right to privacy and dignity (Article 10) and the obligation of states (Article 1).

In its decision, the Committee pronounced that mandatory pregnancy testing of school girls violates their right to freedom from inhumane and degrading treatment and freedom from torture and abuse. The Committee stressed that compulsory pregnancy testing, the subsequent expulsion of pregnant and married girls from schools, and the detention of pregnant girls could not be justified by any ground, as such acts constitute violations of the provisions of the Charter.

The Committee pronounced that girls who fall pregnant and get married while in school are, in fact, victims of a larger pattern of gender-based discrimination and should be provided with special support to continue their education as per article 11(6) of the Charter. The Committee highlighted that subjecting such children to further violation of their right to education through a policy of expulsion from schools is a measure that entrenches the negative societal attitude which shifts the blame on the victims instead of ending the impunity of perpetrators. The decision vividly outlines that education is provided to all children with no conditions attached, and any condition violating the Charter’s provisions is not justifiable.

Accordingly, the Committee called for several actions to be undertaken by the Respondent State, including the review of the Education Regulations, 2002 G.N. No 295 of 2002, to ensure that pregnant and married girls are no more expelled from schools but rather provided with special support to continue their education, the prohibition of mandatory pregnancy testing in schools and health facilities, the re-admission of girls who have been expelled for reasons of pregnancy and marriage and provide child-friendly sexual reproductive health services.
The Committee has requested the Respondent State to submit a report on the status of the implementation of its decisions within 180 days.

The decision of the Committee is available here.